I made a mistake: I am human but I am not a failure 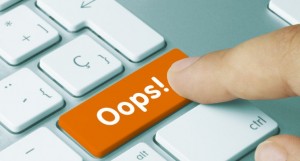 Contrary to popular belief – I don’t have ESP, I am not Wonder Woman, I do not have a magic wand and I don’t have super powers. I make mistakes. I am human. But I am not a failure.

Recently, in the craziness that was end of financial year, BAS season, putting our house on the market and generally trying to be all things to all people, I made the mistake of lodging something twice to the ATO.

Now, to be honest it was not the end of the world. One phone call to the ATO (ok – so that part was quite painful) and after close to 45 minutes we had the issue sorted.

“It was a simple, honest mistake. And yet I let it consume me for the best part of the day as I felt like a failure.”

I questioned my skills, my ability, my knowledge.

Oh for god’s sake girl – pull yourself together. Humans make mistakes ALL the time – no need to get your knickers in a twist.

But – is this what we are turning into? Robot like business owners who feel the need to be perfect all the time and who let a tiny mistake (which had no impact on anything in the scheme of things) make them feel like a total failure.

I tell you what a failure is. A failure is giving up, a failure is having a complete and utter lack of care, a failure is deliberately choosing to ignore said mistakes and not owning up to why it happened in the first place. A failure is not fixing the mistake. I could go on – you get the point.

So I hadn’t failed. And I am certainly no failure.

I had to tell that chip on my shoulder to piss right off. I had made a mistake. Something which I fixed as soon as I realised. The client was informed and certainly were not charged for me to fix the mistake. Communication was open and honest (even though that is always the case anyway).

I think I felt like such a failure as I see others in my industry not own up to their mistakes, so I feel like I am the only idiot who hit “publish” twice. I compare myself to others (I know I know – I should totally stop doing this but I kind of can’t help it).

“I see other industry experts not making this silly mistake and then the self doubt keeps me company. It is a very lonely place when this happens.”

So, rather than ridiculing myself for these “normal” mistakes and hazards of running a very busy and complex business – I put it out there. I say what happened and I shared the mistake in two business groups I am a part of. If my story can help one other person not make the same mistake, well then aren’t we all #winning

I also know that other business owners are not quite as loud and proud as me – so I am hoping by sharing that I am not perfect, they realise behind closed doors, many of us just have the same problems and issues as the next person. We are all normal!

So, the next time you let a tiny mistake eat away at your self confidence and let negative talk of failure set in – tell it to rack off. How you handle mistakes and the actions you take to correct and prevent these, says far more positive things about you than you realise.